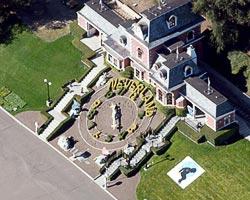 The public auction of Michael Jacksons Neverland ranch, has to be of great humiliation, Following the child molestation charges, the face masks and pajamas, the paradise retreat Stands deserted.

Having defaulted on his mortgage payments, the 2,800-acre property, in central California's wine country, will go under the Hammer on 19 March, the location being Santa Barbara County courthouse. Since his acquittal in 2005 on charges of a breach of contract lawsuit, to the allegations of sexually abusing children, which did not hold up in court, he has been residing abroad.

Announcement of an auction is usually the first step in a long process with often no auction as a result, which is believed by people who know the property market. Certain financial ruin for Michael is reported by the several press reports over the last few days, with the suggestion of another loan, enabling him to clear the outstanding dept.