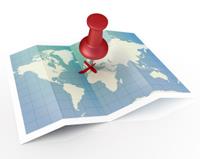 Yesterday Facebook called a press event at their headquarters in Palo Alto, California. With many rumours flying around the internet, the most prominent was that Facebook is going to include a location feature – and how right they were.

Facebook Places is now available in the US and will be available to the rest of the world ‘as soon as it can’.

This feature is only available to Facebook members that has an iPhone app (Android and Blackberry tba) or via the Facebook touch mobile site.

Similar to Foursquare, Places allows people to add places, check in places and ‘tag’ Facebook friends who are in the same location.

A clear issue is security. Facebook has been plagued by stories in the main stream media and could possibly be the number one concern of Facebook users in the UK. This was quickly addressed by CEO Mark Zuckerberg stated that Facebook Places is purely about finding and sharing places with your friends, not the world.

Facebook Places doesn’t just apply to users, Estate Agents and business users can also use the feature to their advantage.

Estate Agents can claim their office as a location and then associate it to their Estate Agent Facebook page. To do this, Estate Agents must certify that they are the official representative.

In other news, which is going to be shadowed by Paces, a rogue app is circulating around Facebook users. This fake ‘dislike’ button automatically posts a message encouraging the user’s friends to add the app and then ask to take a survey which generates revenue for the creators.

Troy Stanley, CTO of Resource Techniques comments on the rogue Facebook app, ‘Estate Agents must always be careful which apps you add to their Facebook profile.

‘If you feel that you have fallen victim to a rogue app, go to Account and then Application settings. From here Estate Agents can remove any applications from their profile.