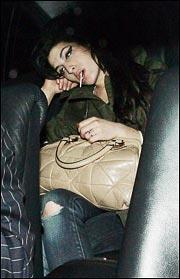 The British singer Amy Winehouse is setting her sights on a new property outside of London.

Amy is planning on moving away from the capital in a bid to help with her drug taking habit.

The Record Label, Universal is encouraging the move, which may help with ditching many of her friends in order to help clean up her act.

A source close to the singer recently told the Sun newspaper "There is so much attention on her in London and it's all getting a bit much. She enjoyed it at first but she needs some space. She doesn''t feel she can go out any more without the eyes of the city on her.
Hopefully a move from London will also be a move away from temptation.

The drug dealers who used to visit her still turn up at her house, and the people looking after Amy don't want her to be tempted," added the source.

Apparently the record label has set up an operation called ''Team Amy'' which aims to help keep the star on the straight and narrow.