Google gets in on World Cup fever!

Google has made it easy for those who want to keep track on the World Cup fixtures and results. Just by searching the team/country such as ‘England’ in Google, you will be given a variety of information including up and coming fixtures, dates, times, knowledge about the team and just before the match the line-up will also be posted. It even has a link to the Fifa website where you can view the details of the two teams facing off against each other.

If you search for ‘World Cup’, information regarding the next game (as well as future games), Groups and Second Stage is available straight off the search engine results page as well.

You can even link up all the tournament’s fixtures to your Google Calendar account, to ensure you don’t miss a game.

From today, you can explore all of the 12 stadiums inside and out that are hosting the World Cup. You can take a closer look at these amazing stadiums that are spread out across Brazil.

Maracanã from the stands

Simply Google search for any of the World Cup stadiums (listed below), select maps and street view the stadium. You are able to view quite a lot of the stadium, including views from the pitch and stand.

These stadiums could be easily found using Google Maps before but the views from within the stadium weren’t available on Google Street View. As of today these stadiums aren’t restricted and are almost fully accessible via Street View.

The streets of Brazil 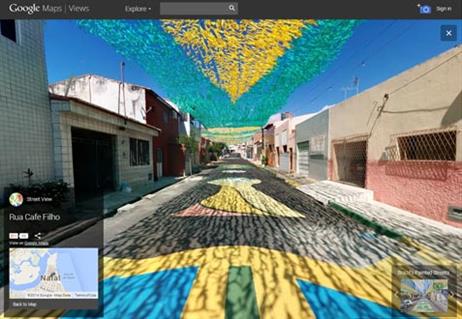 Every four years, Brazilians all over Brazil come together to express their love of the game by painting the streets.

This year, as Brazil are hosting the World Cup, Google have decided to share these creative streets with the rest of the world.

If you are interested in seeing some beautiful World Cup themed painted streets around Brazil, then click here to view Brazil’s Painted Streets.

So get ready for the World Cup with Google, and find out all you need to know!