What’s The Most Effective Social Media Channel for Commercial Agents 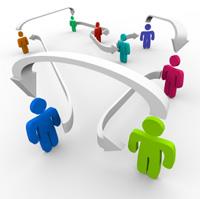 There was a time, not so long ago that when I mentioned Social Media or Social Networking in the presence of a Commercial Agent or Chartered Surveyor these too words would illicit an almost uniform snort of derision.  Yet over the past 4-6 months I’ve noticed a clear increase in the amount of Agents and Surveyors in the commercial property field that want to talk to me about social media. In fact furthermore, they seem to be the ones mentioning it first.

Undoubtedly, the commercial property sector is still experiencing difficult times. Many agents that I speak to seem to be reviewing their traditional business model and looking to opportunities that could be generated from a change of focus.

Whatever their decision at some point the generation of new business contacts and leads will have to be considered. And this is where the change of opinion of social media seems to be coming.

Which Channel Do I Take?

There are actually a multitude of social networking sites out there, but clearly the biggest and most commonly know are Facebook, Twitter and LinkedIn.

The misconception within the Commercial Property sector is that Facebook is the bastion of the snot-nosed youth. But actually the largest growth demographic on Facebook for sometime now has been 50plus, once referred to as the silver surfer. Furthermore, it is possible to setup a company page on Facebook. Resource Techniques has its own, which you would expect for a company in this line of work, check it out http://www.facebook.com/Resourcetechniques

LinkedIn is now the world’s largest social network for professionals with almost 150 million members. It is a purely business focussed network and hugely successful and widely used in many sectors. Yet it is surprising how few chartered surveyors and commercial agents actively use the network or even have a LinkedIn page. It is the ideal network for a sector like property that thrives on relationships, contacts, knowledge and delivers a great platform for one to establish authority and expertise.

Another consideration is YouTube. In the past, the shear cost of video production ruled it out for all but the largest of companies. Yet with the huge leaps in technology and reduced costs both in cameras and editing software online video is now a very really option for even small companies. We will cover this more in future articles, but online video can be a powerful communication tool. Also with Google’s new love off all things moving image, it could be argued that video delivers a short cut to SEO.

Who In Commercial Property Is Using Social Media?

Leading brands like Savills, Jones Lang Lasalle, Carter Jonas, CBRE, Knight Franks all have a Facebook page. Many large corporate organisations across various sectors make use of social networking sites like Facebook, for recruitment and in particularly as part of their wider graduate recruitment programs. But it can and is used for much more.

Yet just having the page is not enough and it is only CBRE and Knight Frank that actually make the best use of the platform. Knight Frank in particular have a very good page, which is well designed, continually updated and delivers real value to their audience.

That said, it remains to be seen whether in the long term, Facebook would be right for small to medium sized Commercial Agents.

Which Will Generate The Most Leads?

Well, as I said earlier, just having the page is simply not enough. Its success will be dependent on what you put into it and how seriously you integrate social networking into your overall marketing activity. But don’t worry my little commercial friends; we will look at this in future articles.

Yet as a start, LinkedIn has to be a given for all Chartered Surveyors and Commercial Agents and the stats seem to support that position. In a survey carried out by Hubspot earlier this year, they found that LinkedIn generated a visitor-to-lead generation rate almost three times higher than both Facebook and Twitter. These finding came from a study of over 5000 businesses.

Why is LinkedIn so successful? Well anyone using the network is in a business mind-set. It is used to share career experience, find information, answers and contacts. It is very much viewed as a business resource.

We will explore how you Chartered Surveyors and Commercial Agents can use and maximise a LinkedIn presences more over the coming weeks.