What to expect from Tablets in 2013 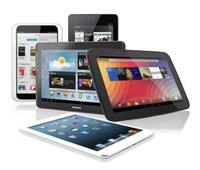 2012 has definitely been a good year for tablets with estimated sales worldwide reaching around 120 million units, which has almost doubled from the previous year.

Large tablets like the iPad still dominate the market with an estimated 59% market share but this is likely to change dramatically in 2013. Smaller tablets will take a bigger piece of the pie, in 2012 around 34 million small tablets (8 inches or less screens) were sold, compared to only 17 million in 2011. It is believed the number will double again in 2013, possibly being accountable for 50% of the tablet market.

The surprising rise in small tablets comes after the release of the Google Nexus 7, released in June 2012 is now selling an estimated one million units every month.

Tablets aren’t cheap, but since the release of the Nexus 7 and Kindle Fire price wars have begun.

With many small tablets going for around £100 to £200, they are now more accessible to a broader range of customers. If the trend holds, prices are likely to drop more as the market becomes more crowded.

Back in 2010, Apple had a huge 87% of the tablet market but as the competition has increased, the dominance has declined since. Apple however still holds a pretty hefty chunk of the market with 53.8% but at the same time Android’s market share has risen to 42.7%, due to its very popular Nexus, Kindle and Nook devices.

More Android tablets are set to be released early 2013 and experts believe Apple will lose its tablet dominance because of this.

However the iPad mini may have saved Apple from being overtaken by Android.

For the last few decades the only option you’ve had to have a computer while on the move was the laptop. However since the Tablet has become more powerful and affordable, the dominance of laptops for portable devices may be coming to an end.

It has been predicted that out of the 9 largest laptop companies only for were likely to sell more laptops in 2013 compared to 2012. These were Sony, Asus, Lenovo and Apple. Yet Dell is expecting its sells to drop down to 16 million, from 25.3 million in 2012.

And forecasts for 2013 tablet sales could be as high as 172 million devices, closing the gap between laptops and tablets.