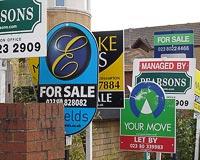 According to latest figures from the Land Registry, house prices have increased.

The average property increased in value by 0.9 per cent month on month, published by the organisation.

It took annual inflation to 6.4 per cent, leaving the average house in England and Wales at £186,045.

The North-West saw the largest growth which reached 2 per cent followed by London and the East midlands at an increase of 1.5 per cent between December and January.

Flats and maisonettes saw the largest inflation, which increases by 7.6 percent and terraced houses increased by 6.8 per cent.

Halifax House Price Index revealed that prices stagnated between December and January which is followed by the Land Registry figures.