Is Google destroying its homepage? 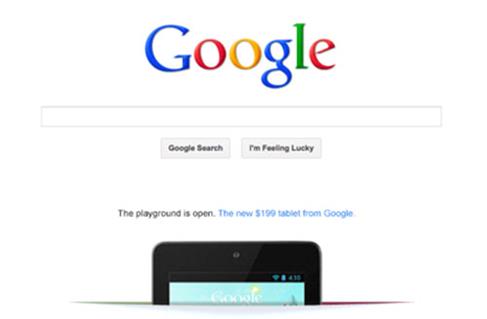 You may have missed this but Google’s homepage caused controversy around the net by putting an animated banner ad on their sacred homepage yesterday morning, disturbing its famously clean white-spaced design.

The ad was for the Nexus 7 tablet, saying “The playground is open”.

Google are previously known for pushing the boundaries of its homepage design with tiny text ads but many believe Google may have gone too far with this advertisement.

Why does it actually matter? Well this white space is visited by around one billion unique users every year, making it the most valuable space on the web.

Google’s success has largely came from its simplicity as well as it’s brilliant results via its search engine but users have always liked the fact that it is just a simple search bar.

Users have always believed that the valuable whitespace was deliberately never developed. Especially with Google Ex Vice President of Search Product and User Experience Marissa Mayer stating back in 2005 “There will be no banner ads on the Google homepage or web search results pages. There will not be crazy, flashy, graphical doodads flying and popping up all over the Google site. Ever.”

Although our biggest concern is that Google won’t be able to resist putting more ads on their homepage now promoting their own products? And if they do, will other companies like Apple follow suit to keep up with the huge marketing push of its competitor?