iPhone for Estate Agents - floorplans on a budget 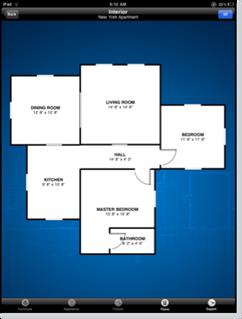 The iPhone App store is the largest mobile application store in the world with over 185,000 downloadable apps. Within 9 months of going live, there have been an outstanding 1 billion downloads.

Many people, including Estate Agents, love the iPhone and use it for a variety of helpful and sometimes pointless activities including games, social networking, travel, sports, news and much more.

In all honesty, the web design team’s expectations weren’t that high. There are a few apps that have been set up as a gimmick – just to make a quick ‘Buck’.

Home 3D seems to be an exception though, by not only being able to produce floorplans but also giving a 3D walkthrough and having the ability to place objects within the house as well as having more than one floor. Once happy with the result, Estate Agents can then export the floorplans via email.

There are some downfalls. The Floorplan image quality is blurry when increased in size and many Estate Agents might find it will take some time to get used to the controls, but it is essentially a good step in the right direction for its first release.

Troy Stanley, CTO of Resource Techniques comments, ’For £2.39 for as many floorplans as you desire, it is a bargain. Perfect for Estate Agents on seriously strict budget.’