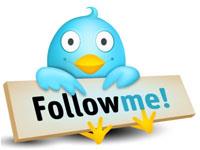 Considering its only 140 characters, posting on Twitter can seem like a daunting task for most estate agents. Twitter’s microblogging has become well established in the last few years with many companies finding it a great way to stay in touch with their customers.

After all, typing 140 characters is a lot easier and faster than typing out a full email, as long as you are used to tweeting.

Studies have found that the distinction between normal sentences and tweets is unsurprisingly that those tweets are less than half as long as a normal sentence, with each tweet containing an average 14.98 words.

Think carefully about what you want to write and what will draw in the user’s attention as every character counts.

2. Learn to be brief

This doesn’t mean you should start using text-speak or miss out certain words to shorten the sentence but instead you should learn to order your thoughts, point out the crucial points you want to get across and write it out simply.

Don’t use fewer words but instead use shorter words and trim off the unnecessary text.

If you are hoping for retweets, make sure you leave 20 characters or more so retweeters can add their own thoughts and comments.

No one wants to follow a plain, dull account that is being used as a marketing tool rather than a social network (too many Estate Agents are doing this).

Instead try to engage with your customers and reply to them with helpful information.