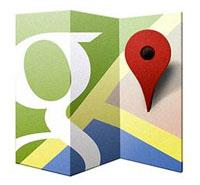 Finally Google Maps is back on iOS! Google’s new Maps app comes out just months after Apple sacked the Mapping Service to replace it with their own Apple Maps.

Soon after its release it was clear Apple Maps couldn’t compare to the much loved Google Maps, with its many navigation problems, some areas missing and lots of other bugs.

Here are just a few of the Apple Maps Blunders....

But now once again we can enjoy Google Maps with StreetView on our iPhones, with no doubt in our minds that it’s correct.

The new app can now do turn-by-turn navigation and offers public transit information. They also are using the same vector-based maps as Apple’s own maps service offering for faster loading times.

Another cool feature is that in the slight chance you do find a mistake; you can simply shake your phone and instantly send feedback.

They have also released Google Maps to app developers so you are likely to see other apps using it as their native mappings tool in the future.

The Google Maps app has already taken the number one spot on the App Store showing the immense popularity of this mapping service over Apple’s own.