Gadget of the week - 3D properties 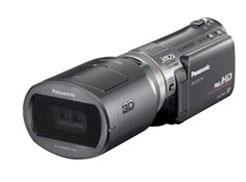 By now most Estate Agents have marvelled at blue aliens running around in 3D. Since then more and more films have added 3D after the title, some in an attempt to boost box office takings.

Now the time has come to hand the power from the directors in Hollywood to the people. People up and down the country will soon be able to film their own videos with the very first commercial camcorder.

The Panasonic HDC-SDT750 uses two lenses to create a world’s first personal 3D camcorder to at home. A little help with a 3D TV, people will soon be recording their cherished memories in an extra dimension – like a baby’s first steps.

Estate Agents can get their hands on the Panasonic HDC-SDT750 in September for a cool £1,300.

Imagine being able to market properties in 3D and display them to customers within your office – not only adding a new dimension to your TV but also to your marketing capabilities.

Troy Stanley comments on 3D properties, ‘Estate Agents, what are your thoughts on 3D? Will it catch on or will 3D fade back into 2D? It is even possible that we could have 3D Estate Agent web designs in the future?’