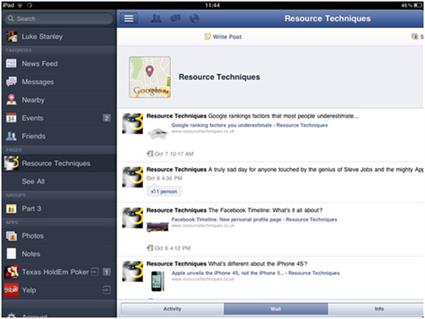 If you need another reason to have a Facebook business page here you go, Facebook have finally released its iPad app.

The Facebook iPad app is now ready for everyone to use.

The app has had countless delays, with rumours floating around the net and even leaks of the build. Facebook is now officially unveiled its iPad app which has been painfully absent.

The app has a smooth navigation menu on the left side of the screen, which allows you to jump from page to page easily.

You use the left hand navigation to get around

The app contains all the usual features you would expect from a Facebook mobile app such as ‘Check-ins’ as well as all desktop features like ‘facebook chat’ are all included in the iPad app.

The iPad app has been designed for user experience which is why the Facebook app has emphasized photos. Photos will now take up the entire screen, which users can simply pinch and zoom if needed. The photo album is simple to navigate by swiping left to right.

The new feature for the Facebook app is the app discovery:

Facebook are also going to be bringing the app discovery to mobile devices.

What is App Discovery?

On the News Feed on your desktop you may have noticed that you will see updates that are posted by friends using various apps and games. When you click on one of these links, you will be directed to the application in question. If you have already downloaded the app you would switch directly to the app or if the app hasn’t been downloaded you will then be sent to the Application on the App Store where you would be given the option to download it.

This will be a great tool to spread the word of new applications across the net.

You can also promote new apps through the ‘requests’ channel which lets users openly invite friends to view certain apps.

This is a big deal for app developers as it means mobile apps can be easily integrated into Facebook’s viral channels. It also means that invites and requests will work across all platforms.
More screen shots of the App: 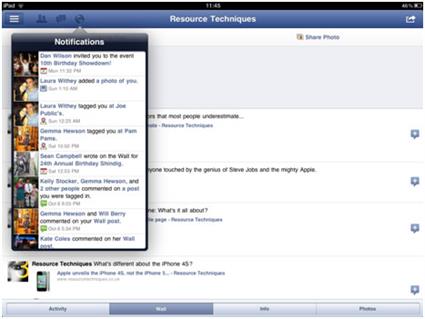 Notifications are on a drop down box, similar to the desktop version 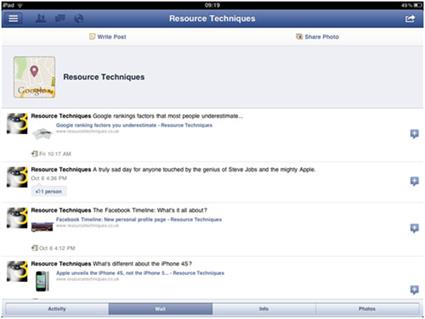 The Wall is very clear and easy to use

The photo album is easy to use, with a click and swipe action to view