Estate agents, try your hand at Monopoly on Google maps 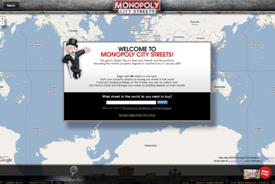 Estate agents do you love Monopoly? Have you found Google Maps one of the best innovations for your estate agent website? What about playing the Monopoly game on Google maps?!

Invented by Elizabeth Magie in 1910 to explain to explain the single tax theory, it is one of the most successful commercial games in the world. Hasbro last estimated that approximately 750 million people in the world have played the game. There have been countless versions of the game, including Star Wars edition, The Lord of the Rings edition and even a 'Heinz' edition.

Good news for all estate agents that love Monopoly, a free version using Google Maps has been released today! The aim of the game is to monopolise the world using the whole world. Players are given three million of Monopoly's virtual currency to build their empire. Once a player has control of the street, they are then able to charge rent and build new, but virtual properties on there. The players can then trade, sell and buy other streets while also sabotaging neighbourhood rivals.

Would you like to play? Give it a go at www.monopolycitystreets.com!

Resource Techniques is provides services for estate agents, including website design, SEO services and software for estate agents. View our portfolio or contact us or request a free web review to see how we can improve your business.