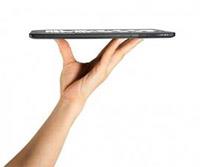 A tablet like the iPad can be a great tool for Commercial Agents and Chartered Surveyors, but those looking to invest in, or upgrade could be forgiven for thinking that Apple is the only route. Yet it seems that in 2011 Apple and its iPad didn’t have everything their own way.

The global tablet market is huge and growing fast. On the residential side, every agent now seems to be using a tablet at valuations and the development of “cloud based” management software gives them huge flexibility and accessibility.

Androids Close In On The Big Apple

Apple still dominates the tablet market, but last year did see Android tablets closing in by gaining over a third of the market. In the last quarter of 2011 an amazing 27 million units were shipped, that’s 150% more than the same period the year before. Makes you think that you might be in the wrong business.

Yet all these figures could be academic since the launch of Apple’s “new iPad” on 15th March. Last week Resource Techniques’ Troy Stanley reported that Apple sold a staggering 3 million “new iPads” in just 4 days. And I thought consumer spending was down and we were all being careful with our money.

The question is whether Apple can maintain these sales figures after Apples “fanboys and fangirls” have all upgraded. As we reported two weeks ago, the new iPad is merely evolution and far from revolution.

Regards other platforms, Microsoft are hoping that the launch of its Windows 8 operating system will help its hardware partners capture more valuable market share. In Q4 of 2011, they had a paltry 1.5% share of the market.

The big question for 2012 is what Nokia are up to. They teamed up with Microsoft some time back and will be bring out a whole rage of Windows-based smartphones. The whispers about town are that Nokia are also planning to enter the tablet market…perhaps even as soon as 2012. Watch this space.