There will be at least one person in your Estate Agent office that refuses to grow up. They are, and always will be, the Peter Pan of the office who visits Never Never Land through the medium of gadgets - maybe a little too frequently for their own good.

To celebrate these rare Estate Agent creatures, the web design team here at Resource Techniques have collected a selection of gadgets that will make any gadget lover weak at the girder.

Firstly we have the Parrot AR Drone. Any gadget obsessed Estate Agent will be more than aware of its existence. Nothing like a parrot, the AR Drone uses four propellers to hover, fly and zoom round the room. If that wasn’t enough, there are two cameras AND the whole thing is controllable by your iPhone.

More advanced techno-geeks will be aware that the Drone can fight virtual enemies from the video displayed on the iPhone and a future update will allow two Drones to fight each other (again using virtual missiles).

At around £269.99, it will certainly stop them droning on about their other gadgets.

Being told off as a kid has never stopped anyone, anywhere throwing snowballs. There’s nothing more satisfying in winter than perfectly throwing a snowball straight and true.

This blaster compacts 3 snowballs at a time and is able to propel them up to an amazing 50 feet - Perfect for standing behind the front line and launching into enemy territory.

Watching a few videos online it was clear that blaster is not a gun as such, but more a slingshot. This still won’t stop you firing up to 50 meters and being the envy of middle playground.

At around £27, this gadget certainly won’t freeze your bank accounts. 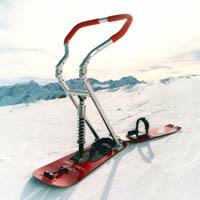 Do you usually ride your bike to work, but the roads are and public transport is letting you down? Maybe it’s time to invest in the venomsnow switchboard.

Reviews state that it basically a hybrid between a scooter and a snowboard meaning that it will easily glide down a hill whilst also being able to traverse flat planes of snow and ice, just as long as you can get traction from each push.