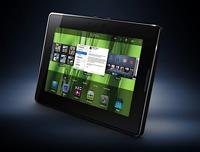 Estate Agents, never think that the iPad is the only touchscreen tablet out there on the market worth buying.

Blackberry announced this week that they will be releasing their own tablet and the pictures make it look simply stunning (if not slightly similar to its main competitor). It looks futuristic, sleek with a crystal clear picture.

The Blackberry PlayBook is self-described as “The first professional tablet” so will be playing off the views from their mobile device, again very similar to one of their competitors.

It has a 7 inch screen, 3 mega pixel camera on the front and a 5 mega pixel on the back (possibly for video conferencing), full High Definition screen, built in WiFi and Bluetooth and with a total weight of 400 grams – half the weight of the iPad.

Software wise, it uses HTML5 as well as handling flash and ADOBE AIR apps – so no restrictions on which websites you can and can’t use.

Troy Stanley, CTO of Resource Techniques comments, ‘Although similar, there are a few features that could propel the Blackberry Playbook as a leading product in the tablet market.’