Bing maps - Estate Agents can create their own destination map 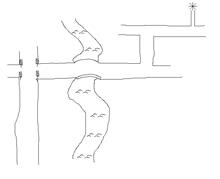 How many times have you drawn out a map to show someone a destination? You end up scribbling out an unsophisticated route with a few landmarks to help them along the way - similar to the image in this article.

Now let's be honest here, unless the person drawing is a fantastic artist, the map can be open to interpretation. For example, take the image above - are there mountains poking out of the river in the middle? Is it even a river?

Now Bing maps tend to be a little overlooked in the UK because of Google's market dominance - the majority of Estate Agents now use Google Maps to plot property search results, even on the iPhone.

To help, Bing has released an application called Destination Maps. This can be used to create four different maps to print and share. One is similar to the image above and one is in the style of a treasure map.

'This quirky little feature could be used for a children's birthday party to show parents the location of the party - if it is pirate themed' - Troy Stanley.